The inverse of a n-by-n matrix G is an n-by-n matrix F such that FG = In. If this matrix
exists, we will denote it by G-1. Let us first look at an example of a 2-by-2 matrix. We have
to find coefficients a, b, c and d such that the following equation holds:

We can do this by just stating the equations for the single components:

Solving for the coefficients of F yields:

Note that now we can solve the system of linear equations that we had in the last lecture
by matrix-algebra operations:

However, in general these systems do not always have a unique solution. In some cases
they do not have any solution, in other cases they may have infinitely many solutions. This
is related to the invertibility of the matrix on the left-hand side of the system. Consider the
following example:

This result tells us that there are no coefficients a, b, c and d such that DC = I. We say
that the matrix C is not invertible or singular. If you look at systems of equations involving
the matrix C you will see that they either have no solution or infinitely many, depending on the
vector on the right-hand side. Later, we will have a look at the general relationship between
the invertibility of a matrix and the number of solutions of systems of linear equations in that
matrix.

It turns out that the invertability of a matrix is related to its determinant. In the case of a
2-by-2 matrix, the determinant is defined as follows:

Let us see what happens if we calculate the determinants of the two matrices we tried to
invert before:

With this notation at hand, we can write down a relatively short formula for the determinant:
Note, however, that this formula requires that we know the determinants of all terms Aij .
Note that so far, we only know them for 2-by-2 matrices (from our definition above). Hence,
we can now calculate the determinant of a general 3-by-3 matrix:

You may have seen other ways of obtaining the determinant. We will not cover them in
this course. You are free to use them throughout the course (as long as they are correct, of
course. . .).

Let us go back to the general representation of a system of n linear equations in n unknowns
that we introduced in the last lecture:

It turns out that the determinant of G gives us a lot of information about the number of
solutions of the system. It also depends on the nature of h: If h = 0 (i.e. all its components
are zero) we are dealing with a homogeneous system of equations, in all other cases (h ≠ 0,
i.e. at least one component of h is not equal zero) with an inhomogeneous system of equations.
The number of solutions can be summarized in the following table:

In order to write down the general formula for the inverse of a matrix, we need the concept of
the adjoint. The adjoint of a matrix A is defined as the n-by-n matrix whose row j, column i
element is given by

(notice the change of the indeces j and i, which amounts to
something like a transpose). For a 2-by-2matrix this works as follows (note that the determinant
of a 1-by-1 matrix is given by its single entry):

8.5 The Inverse of a General n-by-n Matrix

Now, we can finally write down the formula for the inverse of a general n-by-n matrix. If the
determinant of an n-by-n matrix A is not equal to zero, then its inverse exists and is found by
dividing the adjoint by the determinant:

8.6 Rules for Calculus with Inverses

The following rules apply for the calculus with the inverse: 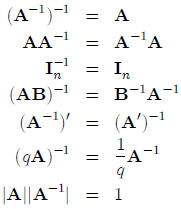 9 Derivatives with Respect to Vectors

A very simple function of a vector x is its product with another vector a. We can get the
derivative of this function by multiplying out and then taking the derivatives with respect to
the single components of x:

It gets a bit more complicated if we take the derivative of a quadratic form x'Ax. Let us
derive the general formula by looking at the simplest example where x is 2 by 2:

Eigenvalues of an n-by-n matrix A are values of q that solve the following problem:

Note that we have a free choice for both q and the vector x, as long as x ≠ 0. Let us
perform some operations on this equation to get it into the form that we are used to:

This is a homogeneous system of n equations in n unknowns. That is, this system can only
have a solution with x ≠ 0 if the following holds (remember the rules for the systems of linear
equations from above!):

When we take one solution

back to the original problem, we can solve for the corresponding
eigenvector x. Notice that there are many possible eigenvectors related with one eigenvalue
– since we have chosen

such that the matrix A - qI has determinant 0, this system has
infinitely many solutions for x now. The possible eigenvectors are related to each other: they
are multiples of one another.

Let us go through all this for the following example to get a feeling for this:

The following are important properties of eigenvalues and eigenvectors: